Browse: Home / Matches Made On Earth

Matches Made On Earth 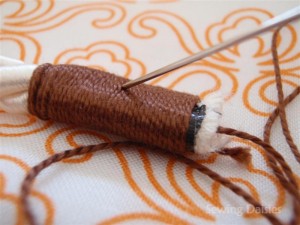 In the old days, Chinese girls were not deemed suitable marriage material until they had mastered the womanly art of sewing and needlework. So before a girl was wed, it was customary for her family to prepare for her a basket containing needles and threads, a pair of scissors and various other sewing paraphernalia, as a symbol of her proficiency in the skill.

Today that tradition lives on, as do many other Chinese wedding customs from earlier times. Marriage used to be a matter too vital to be left in the hands of the young and it was, in fact, often for the express purpose of continuing the ancestral line and creating alliances between families. In these more liberated days, however, love often gets the biggest say.

Once a match has been confirmed between a couple, the bridegroom’s family will put together a set of gifts, called the guo da li or presentation of the grand gift, for the bride’s family. Every item in the guo da li is presented in even numbers because ‘good things double’ and each has a specific meaning, mostly to do with everlasting love and having children, preferably sons.

As part of these gifts are a pair of coconuts pasted with a red paper-cutting of the Chinese word for double happiness is used to represent children and a pair of arecas or Betel nuts which signify life-long love, said Lee Ho Yin, the third-generation owner of Chiu Shing Coconut and Spice Co in To Kwa Wan, which has been supplying guo da li in Hong Kong for more than 50 years.

Also included in the guo da li are four cans of Chinese tea that symbolise undying feelings; four types of dried fruit and nuts including longan, lychee, walnut and peanut, for good luck; five cereals: lotus seeds, dried white lily, red and green beans and red dates to herald the imminence of healthy children and a pair of big red candlesticks because electricity was not available in the past, added Mr Lee.

To complete the guo da li are a pair of red vertical banners that announce eternal love in calligraphy writing, a ruler which again signifies children because the ruler was traditionally a tool for disciplining naughty kids, and pine leaves tied up in a red string to usher in good fortune. 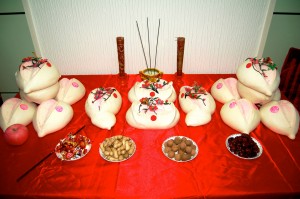 Steamed wedding cakes in pink, white, yellow, orange or brown were also customary gifts offered by the bridegroom to the bride’s family. These cakes, which swell as they are steamed, represent growing wealth.

They also denote the wish for greater colour and variety in the life of the newlyweds, said 70-year old Tse Ching Yuen, second-generation proprietor of Tai Tung Bakery in Yuen Long, which is believed to be the only surviving bakery in Hong Kong that continues to supply these traditional wedding cakes.

On the night before the wedding, the womenfolk from the bride’s side will gather in her room for a hair-dressing ritual called sheung tau, an act that initiates the young bride into womanhood. A ‘good fortune’ woman will comb the bride’s hair from top to the very bottom, with each comb symbolising different things such as “harmony from now till old age”, “sons and grandsons all over the place” and “good wealth and a long-lasting marriage”.

Nowadays, a bride helper or dai kum tse would be in charge of this and other wedding rituals too complicated for a modern couple to know. There aren’t many bride helpers left in Hong Kong. “A lot of the dai kum tse are retired,” said Ngan Yiu-Wah, a bride helper popularly known as Mrs Leung.

“Nowadays people ask their relatives to help out. But I am quite happy carrying on with this work. It is a matter of interest for me. My business is ok and is mostly by word of mouth,” she continued. According to Mrs Leung, many of the wedding rituals and traditions are still being observed by couples today.

The wedding day would start off with the bridegroom going round to the bride’s home to pick her up. He will often be playfully stopped by the bride’s friends or family members who will extort some lai see or red packets from him before they allow him to carry on in his quest.

Over at the bridegroom’s home, the couple will be guided through a tea ceremony by the dai kum tse or another appointed wedding officiant. They offer tea to the groom’s elder family members and receive gifts such as jewellery or money in return. This is followed by the wedding banquet in the evening.

Three days after the wedding, the bride returns to her parents’ home bearing gifts of a lettuce, which represents money, and candy to denote a sweet life. Many of these rituals are meant to invite a long, happy and productive marriage for the couple. They, however, do not guarantee compatibility.