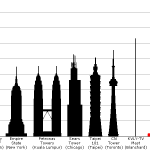 Published in Office Life February 2008 Architecture, according to American novelist and philosopher Ayn Rand, is primarily about creating spaces for human beings to inhabit, and in so doing it expresses what it means for man to inhabit this earth. From the Burj Dubai to the Shanghai ifc to the Freedom Tower and the International […]